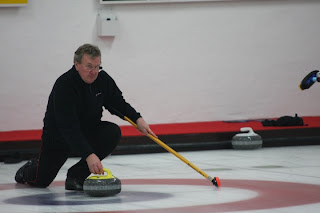 Congratulations to the Willie Jamieson rink for reaching the finals of the Scottish Senior championships for a second consecutive season. The team is made up of three Ballindalloch members, Skip Willie Jamieson, Gordie Kennedy and David McGaan along with fourth member David Kelly.

The team came through the qualifying event at Greenacres on a record of three wins and one loss, topping the group. They now head to the finals at Hamilton from February 9 - 12 where they have drawn to play against former Scottish Champion Graeme Adam, as well as Jack Steven, Billy Nairn, Don Stark and David Hardie.

We wish the team best of luck in the finals. 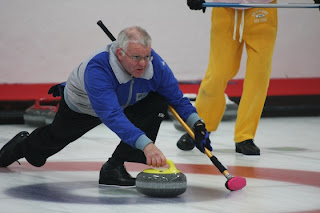 Below: Gordie Kennedy in action.
Posted by Buddha at 23:26 No comments: 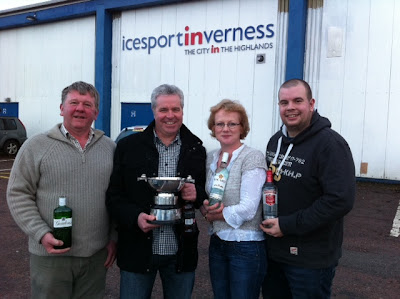 On Saturday the Ballindalloch team of Steve McGingle, Robert Bremner, Tony Duncan and Audrey Marr travelled the short distance to Inverness to compete in the 2012 Area 10 Bookless Quaich.

Having been drawn to play the Bught Ladies in the opening game the team believed they were in for a rough ride! Bught Ladies having won the opening Bonspiel of the season. On the day though a very different Bught team took to the ice. Ballindalloch controlled the game from the start scoring 2 consecutive 3's before a big 5 killed the game.

Final score Ballindalloch 7 - Highland 3
Having a far more superior shot difference than closest challengers Nairn, Ballindalloch won the Bonspiel and took home the Bookless Quaich for the first time in our history.