Charlie has been a life long member of Ballindalloch Curling Club and is a regular at bus bonspeils.  Whilst not yet able to throw a stone full length at his home rink in Elgin, it has been pointed out to him that there are some experienced curlers have a similar problem on certain nights! 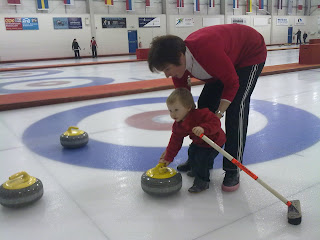 Charlie coaching Auntie Ray his grandads best Crampit delivery
Still prone to the odd on and off ice tantrum (bit like his father in that respect then?) he has an exceptional crampit delivery style (as coached by his namesake grandad?) with a preponderance to toe-slide mid delivery (mum's influence?) and would possibly do better if he didn't blether so much (granny's fault?) 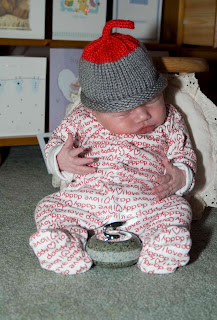 Charlie and the infamous Bob Cowan Curling Bunnet!﻿
Definitely one for the future and this season should see his first tentative ventures on ice with the wee rocks. Keep an eye out for this wee star at the rinks if for no other reason than he is a trip hazard!
-o000o-
Gordie Kennedy

Gordie hails originally from Perth where he curled for many years in both Province & Super League competitions.  Starting while still at school at Perth Grammar School (when they still used slate & chalk) he progressed through Perth Under 30's into Errol Curling Club & Glenfarg Curling Club.

He turned his hobby into a profession when he joined the RCCCCCCCC in 2003 as the Curling Development Officer for the Highlands & Moray before moving up to the hallowed halls that are Cairnie House as the National Development Manager.  A new young family, a dislike for the politics involved at that level  and the poor standard of beautician at the RCCC, saw him leave in 2007 to set up his own Garden Maintenance business.....(he's not pretentious enough to call it a Landscaping Business!). That fits in great with the curling season, not that that had anything to do with his career choice........ 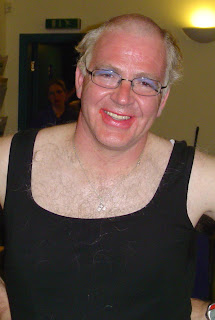 Many Thanks go to Sheila Swan his Beautician.....well she wasn't a magician!!!!

Currently he is skipping in Division 1 of Moray Province East and last year chalked up a first win in that league for Ballindalloch skipping Ryan Mackenzie's rink.  Needs to get his act together in both the Gammack Bell and the Mixed Pairs as his form has slipped in the past few years after a string of wins, and still has the Province Knock-out to win after many seasons of "close but no cigar" finishes. 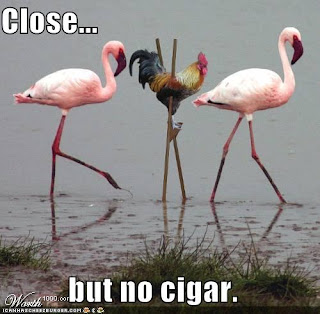 Out of club curling he's managed a visit to the Scottish finals and this year, with fellow Ballindallochers Willie Jamieson & Dave McGaan and Dave (Slug) Kelly, managed to reach the semi-finals of the Scottish Seniors at a first attempt! (It's ok they were all surprised too!!!!!) Not bad for an shits & giggles team. Sometimes been spotted impersonating Mary Gammack a once well renowned curler in the Province and mother of the Gammack Girls. 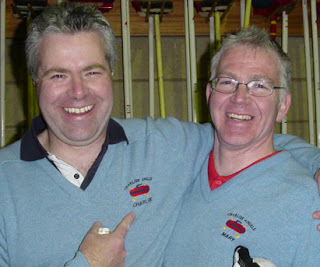 Easy to tell it's not Charlie & Mary as they've not been this close in years!!!!!

Infamous locally for his ability to release the stone within millimetres of the hog-line and for his ability to sleep horizontally in the back of a VW Golf. He holds the post of treasurer in the Club and even more worryingly Vice President. 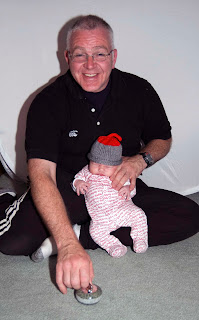 
-o000o-
Ian Kennedy
Ian in another life long member of Ballindalloch Curling Club and has been spotted on a few bus bonspeils. Whilst not yet able to throw a stone full length at his home rink in Elgin,he has made a few attempts at throwing his big brother across the bedroom floor an I am assured by him that this is practice for his, much vaunted, future curling career. 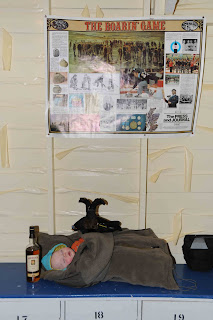 Ian after a hard night at his first outdoor bonspeil at Aberlour Pond!

Just starting to have to the odd on and off ice stamping tantrum (obviously had lessons from Fred Astaire?) he has an exceptional ability to quaff large volumes of liquid,belch & fart at will then fall asleep in the corner (as coached by his godfather?) yet to master a delivery technique (godmothers influence?) and still not found it necessary to speak  (granny and big brother do that for him!) 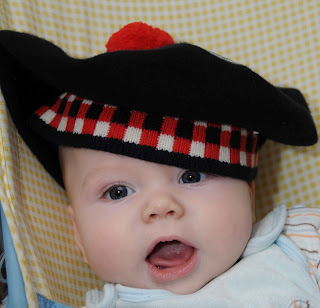 Ian and the prerequisite Bunnet, at the required jaunty angle!


Keep an eye out for this wee chap at the rinks, if for no other reason than he is likely to be hurtling towards you at great speed astride a curling stone thrown by his brother!  Currently you are more liable to smell him before you see him, given it is Strawberry season.........
-o000o-
Ruth Kennedy-Gammack

Mother of the afore mentioned Ian & Charlie Kennedy, understanding (sometimes at least) wife of the the above Gordie Kennedy....and sometimes curler when the chance of a babysitter happens along!

Started her career at Aberlour Curling Club lowering its average age in half on arrival.  Moved clubs to avoid having to wear their obligatory false teeth and glasses as part of the need to feel at one with fellow curlers in the club. has since then tasted the sweet smell of success, as well as the odd Bacardi, in many a Province competition. 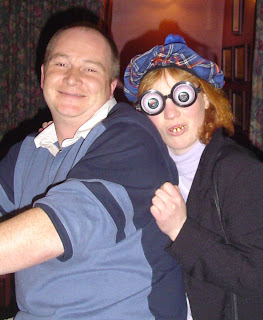 Even with  new stronger glasses Ruth pulled the ugly fat boy...again!
Renowned locally as the girl most likely to be last in the bar (mind you that was BC**) , as a veritable ace at handle fiddling and as an exponent of the oft maligned toe-slide. Still a swinger but puts it to good effect and has been known on occasions to take the odd treble....Bacardi that is not take-out.  Also loves doing it outdoors in Aberlour but only when the pond is frozen! Working at the local hardware store GAMMACKS she is also good for the required ironmongery for a Lock-in! 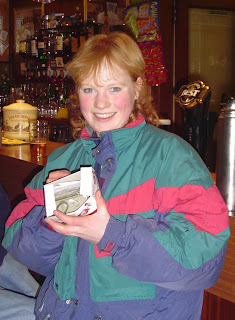 With the famed lock after another night at the pond!
Also renowned as one of the infamous Charlie's Angels of which there are way too few sightings of at the rink these days......She too is a rare sight and has to be prised from the cozy confines of her wee hoose to get dragged out of a cold winters night.  NEVER SPOTTED ON A 09.10 session since BC** so save yer pennies when trawling the club for a sub for a late session, but always up for a bonspeil. 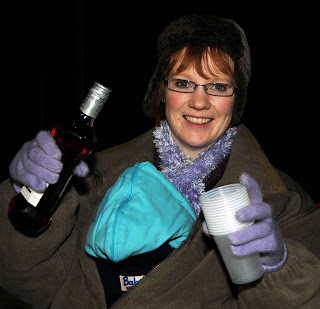