A number of important issues were discussed, including the club billing skips for competition entry fees, raising the annual subs, the feasibility of holding a second club bonspiel during the season and allocating and billing skips for Area 10 Bonspiel.

The meeting was concluded with the prize giving, Callum Jacklin accepted the George Grant Memorial Trophy on behalf of the  Stuart Mackenzie team of Stuart, Bob Lawton, Eilidh Yeats and Callum.

Thanks go to John Grant for the use of the distillery meeting rim and the generous prizes he donated. 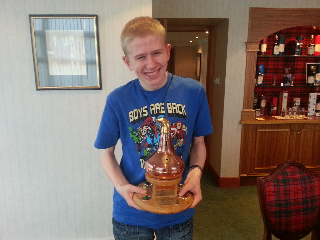