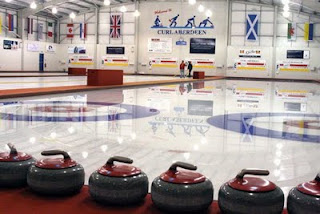 The Millennium Bonspiel, Sponsored by McKerron and Milne, will be hotly contested this weekend in Aberdeen between four Ballindalloch and four Fochabers rinks.  If they can make it to the rink in one piece( you know what Ballindalloch/Fochabers Bonspiel buses are like!!) skipping the Ballindalloch teams this year will be Dave McGaan, Geordie Kennedy, Lynn Scott and Willie Jamieson.  In the rank and file will be Alan '100% record' Mcintyre, aiming to win the bonspiel for the fourth time, Eilidh Yeats, aiming to cap off a great season, by wining the Bonspiel for the first time.  Dave Kelly will bring a bit of colour to the affair and Brian Marr will hopefully bring his legendary drinking antics to the fore, and  give his skip Willie 'hollow legs' Jamieson a run for his money!  Buddha is aiming to go one better than the runner up spot he has had to settle for in three of the last four years and Ryan Mackenzie is desperately trying to avoid taking yet another wooden spoon home to Vicky!

check back next week for a Bonspiel report and maybe a few snaps!!