Last seasons Division 4 champions took to the ice last Wednesday to play their first game in the lofty heights of Division 3.

Team Scott got off to a flying start, opening up a five shot lead after three ends.  By the time the fourth end got underway Ronnie and his team had warmed up,  taking a big four and reducing the deficite to one, game on! Lynn took a single in the fifth before Ronnie took control of the game with a three in the sixth.

Into the seventh, and final end, things got interesting.  With Lynn about to play the last stone of the end this is what she faced: 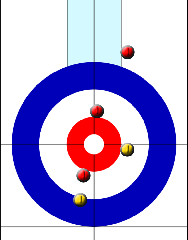 With three stones biting the four foot circle, knowone was sure who lay shot.  Lynn (playing red stones) elected to tap the red stone biting the top four to ensure at least the peel.  The shot looked good all the way, but on unpredictable ice, swung at the last missing the target stone and coming up short.

It came down to the measure!  After a few careful attempts it was given to the good guys, just!

The first, hard fought points on the board for team Scott.

P.s , as it turns out Ronnie had to call on a sub, but as the sub plays for a division one team, had to give up a penalty shot resulting in a win for team Scott.