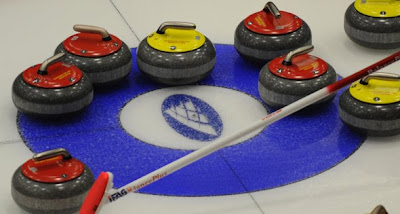 The Moray Province Mixed Pairs will be played on Tuesday night between 6.30 and 9pm

With a reduced field, due to a number of withdraws, and a change in time due to the Leisure Centre wishing to close at nine, a re-draw had to be made.

Ballindalloch will be represented by two teams. Gordie and Ruth Kennedy play Forres' Sandra McIver in their opening game, while Robert Bremner and Eilidh Yeats take on a team from the Moray Junior Curling Club.

Good luck and good curling to both teams.
Posted by Buddha at 21:02