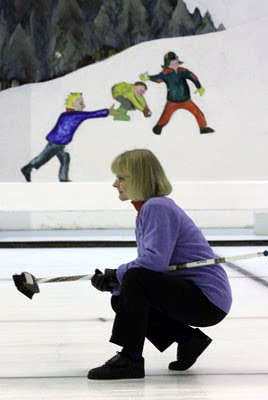 With two games remaining in Division 4 of the Moray Province (East) Lynn Scott's rink have secured their 4th title in five years.

In a nail biting game against closest rivals Bob Stewart of Elgin, Lynn and her team of Alan McIntyre, Robert Bremner and Don Gatt survived losing a few early singles to come out on top winning 6-4 and with it secure the Bob Harcus trophy.

Having only lost their opening fixture, Team Scott have posted 6 straight victories on their way to the League title. This season has also seen a change in line up to the successful team of the previous 4 seasons, Don Gatt coming in at lead to replace Sam Williams, who is shortly due to have her first child.

Photo shows Skip Lynn Scott with her mischievous team in the background! :)