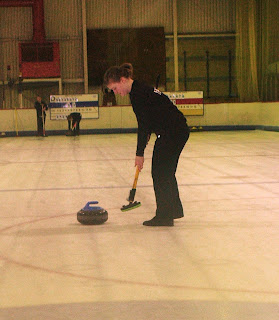 On Tuesday night, 5 members of Ballindalloch took to the ice to play in the Moray Province Mixed Pairs competition. Five times winner of the competition Gordie Kennedy was playing with his wife, Ruth, in the absence of his regular playing partner Lynn Scott. Robert Bremner was playing with Eilidh Yeats and Audrey Marr was playing alongside Mike Watt of Fochabers.

In the opening round of games Gordie and Ruth took on Forres' Sandra McIver. The Kennedy's were in control from the start and ran out 7-0 winners.

It was an all Ballindalloch affair in the second round of games as the two highest scoring winners from the first round, Robert and Eilidh faced Gordie and Ruth.

In the first end Eilidh played a just off centre line guard with her first and came round it twice, laying top twelve foot and back twelve foot, her fourth came to rest on the back four foot to leave them lying three. With the first of his skip stones Gordie played a delightful draw to the button, ferociously swept may I add. With the last of his stones Robert played an up weight shot to pick Gordie's shot out, leaving them lying three again, and again gordie played a great draw under pressure to get his single.

The momentum in the third end swung both ways with a few missed shots from both teams, Gordie was faced with a single stone in the eight foot with his last, he hit and rolled out to blank the end.

In the last end Robert and Eilidh played the end trying to protect a single counter in the back eight foot. Somehow they managed this and ran out 4-1 winners.

Now to the final standings!!

With other High Road games going their way Robert and Eilidh managed a score of 4 points and +11 Shots, beating Neil and Susan Durno by one shot to claim the Trophy! Gordie and Ruth Kennedy were placed third on +3 shots.

Looking through the role of past winners Robert and Eilidh are the youngest ever winners of the Moray Province Mixed! Congratulations.

A successful night for Ballindalloch.